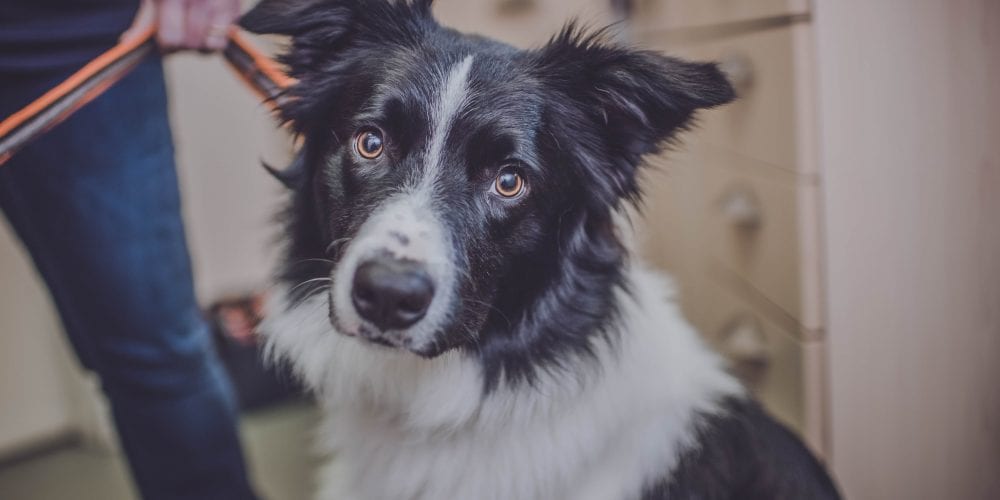 A dog who broke his leg while chasing a car has gone on to have a successful career in the canine sport of flyball.

Bryn the Border Collie has come on leaps and bounds since the accident when he was a pup.

But thanks to vets at Willows Veterinary Group, the plucky pooch has put the ordeal behind him and has recovered swiftly enough to become a star member of the Wilmslow Flyball Starter Team, helping them win all of their last five races.

His new-found talent sees teams of dogs race against each other over a line of hurdles to a box that releases tennis balls.

But Bryn’s owner, June Morrisroe of Staffordshire Moorlands, said it still hasn’t stopped him from bolting after cars and as a result has to keep him on a tighter leash.

She said: “We was a lovely puppy but when he got to 12 weeks old, he started to chase after cars, which is quite common as it’s in a collie’s nature to herd.

“One day, when it was particularly cold and icy, he ran at a car that came towards us, his lead came out of my hand and the car hit him, running over his back legs.

“Luckily the car was going quite slowly but Bryn suffered a nasty break.

“He was in a crate for three months while he recovered.”

Bryn was taken to see vet Carole Potter of Charter Vet Surgery in Biddulph, which is part of Willows Veterinary Group.

Carole referred him to Eandil Maddock, an advanced practitioner in orthopaedic and spinal surgery, who treated Bryn’s tibial fracture.

The vet of 24 years said: “Bryn is a lovely dog who because of being so fit and young, has rehabilitated a lot quicker.

“I used plates and screws to mend the fracture in Bryn’s leg and post operatively, he’s been doing really well.

“I knew he would make good progress if we got him stabilised without complications so I would expect the positive outcome we’ve got.

“It’s also great to hear he’s doing so well on the flyball team.”

Vet Carole who has been looking after Bryn for his aftercare said: “Bryn has done really well and has recovered completely without any complications.

“It helped that he was so young when the accident happened, as he was able to bounce back better which helped with his high performance training.

“It’s nice to hear how well he’s doing and what happened to his leg is not affecting him.

“I know June is extra careful when he’s around cars now.”

June said once his leg had healed, Bryn joined the flyball team at 13 months old and has won every starter competition ever since.

Seconding that was Janice Pickup who runs the team.

The team captain said:  “Bryn is doing really well – he is an energetic, enthusiastic collie with high drive which makes him a perfect flyball dog.

“Flyball dogs need to be driven and have stamina which they build up through training, work at home and racing.

“Bryn has been part of our successful novice team.

“The team have won their division every time they have competed including winning Little League at the UK Flyball League Championships in Lincoln.

“Bryn was an integral part of the team with his speed and reliability.

“He is working well in training and we have high hopes for his future – he will graduate to Sanctioned Flyball racing this year.

“We are working hard with him over the winter and he is improving with every session.

“Our team want to improve our dogs speed but our main concern is teaching them to race and turn correctly without damaging their health.

“Bryn’s owners are very committed to this mission statement and work hard on his training and welfare.”

June, who has six dogs in total, with five of her talented canines competing in Flyball, added: “Bryn is a natural at flyball. He’s 17 months old now and it’s like nothing ever happened to his leg.

“Bryn is coming on really well, he’s got such a lovely personality and is so full of energy.

“Eandil was lovely. He did a really good job of fixing Bryn’s leg which has allowed him to thrive at flyball.

“He still wants to chase cars though, but we are working on that.”

For more information about Charter Vets in Biddulph go to www.chartervets-biddulph.co.uk  or call 01782 513077.