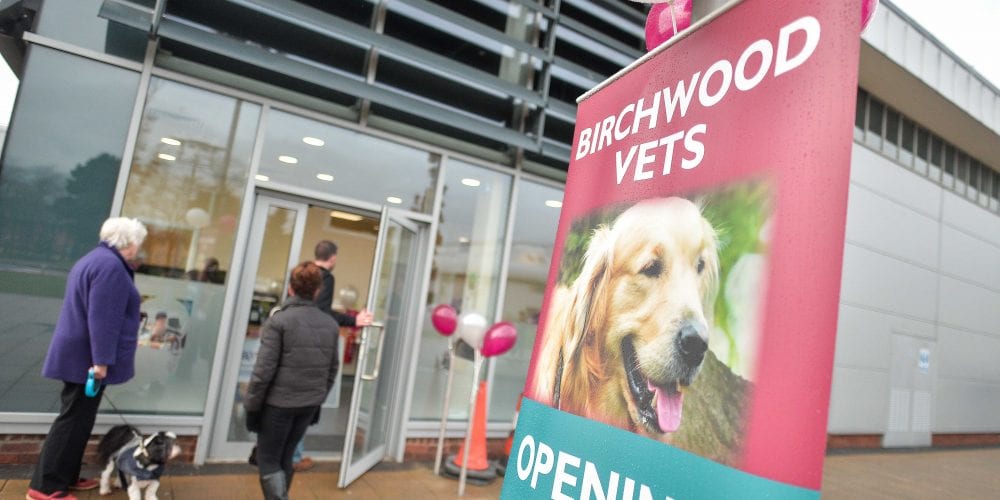 PET owners and their four legged friends queued up for the first sneaky peek of a new veterinary surgery at a Birchwood shopping centre.

A former plant room at the shopping centre has been transformed by the independently-owned Willows Veterinary Group and an Open Day was held for animal lovers and local VIPs to enjoy a guided tour of the new state-of-the-art facilities.

Warrington North Labour MP Helen Jones called by to take a look, shortly followed by the town’s Deputy Mayor, Councillor Les Morgan, who was there with his wife and Mayoress, Gwyn.

Head vet Philippa Bradley said: “We were due to start the tours at 10am but by 9.45am there was already a queue waiting for us to open up.

“We had a fantastically successful day and everyone who came along was very impressed with the facilities.

“We’d signed up about 20 new clients by lunchtime.”

The new surgery includes two consulting rooms, a pharmacy, a laboratory, an operating theatre with a separate prep room, an X-ray suite, and separate wards for cats and dogs.

It is the latest and 25th addition to the Willows group which has practices across Cheshire and into the Wirral and Staffordshire. It also has a referral veterinary hospital, two equine centres and a five-office farm practice.

Philippa, a vet for eight years who is leading the five-strong team at the new practice and is also in charge at Orford Lane Veterinary Surgery, added: “We chose to open in the shopping centre to better serve pet owners in the Birchwood area.

“We had people at the open day who hadn’t been clients before along with some who have been using our other local surgeries.

“It was great to give people who have probably never seen anything like it before a look behind the scenes of a working vets’ surgery.”

After a guided tour of the new practice Warrington North MP Helen Jones said: “The new surgery is extremely nice and has some very good facilities.

“I am impressed with the high-tech equipment it has for treating the animals and it’s very well located to serve the Birchwood area.

“It’s always good to see new businesses opening up in the constituency.”

“That’s why it’s good to see this new surgery opening which is a real asset to the area and its animal lovers.

“I’m really impressed by what I’ve seen. It’s nice, bright and pleasant and has some of the very latest facilities.

“This is a facility that’s much needed in the Birchwood area.”

One of the new clients signed up during the open day was 19-year-old Alyx Diken from Birchwood who had brought along her seven-month-old Cocker Spaniel, Harley.

She said: “I’ve decided to make this Harley’s regular vets because of the great facilities it has and its friendly atmosphere.

“I had been taking him to a surgery over in Widnes for his regular check-ups but the new practice is just around the corner from where I live and will save me making a 20-minute trip.”